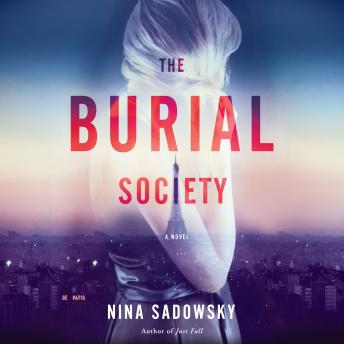 The Burial Society: A Novel

A woman running from a dark past stumbles upon a tangled nest of seductions and secrets in this psychological thriller of obsession and betrayal.

Catherine, no last name, doesn’t bury the dead. She rescues the living—from intolerable, abusive, dangerous lives. Her darknet-based witness protection program, the Burial Society, is the last hope for people who desperately need to disappear. Catherine takes care of them and provides new identities. She is effective and efficient—until she discovers that her slipup may have compromised a client, maybe even killed her. Powerless to help without exposing her shadowy profession, Catherine makes a drastic move.

With her covert service relocated to Paris, Catherine’s done her best to move on. But when a dark part of her past suddenly appears in the City of Light, she refuses to run—and her life takes a harrowing turn.

Using all the tricks of her unusual trade, Catherine weaves her way through a dangerous landscape of treachery, infidelity, paranoia, and secrets that bind as deeply as blood. But the evil of the enemy she’s pursuing runs deeper still—to the bone. And even Catherine’s most cunning skills may not be enough to save herself.

Praise for The Burial Society

“A complex but strangely exciting thriller.”—Booklist

“A deeply unsettling, compulsively entertaining Rubik’s Cube of a novel . . . Every time you think you’ve unlocked the puzzle, Nina Sadowsky introduces a new twist that makes you start guessing all over again.”—Michelle Richmond, New York Times bestselling author of The Year of Fog and The Marriage Pact

“The Burial Society is a twisty, ever-deeper, can’t-let-go read! The heroine can trust no one as she struggles to help abused and endangered women in a world of secrets and shadows. . . . A dynamite psychological thriller by a new master of the genre.”—Karen Harper, New York Times bestselling author of Falling Darkness