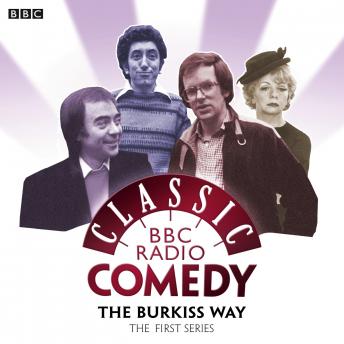 Now available together for the first time are all six episodes from the first series of classic comedy from David Renwick (who went on to write One Foot in the Grave), Andrew Marshall (who later wrote 2point4 Children) – and Eric Pode (of Croydon). Includes: 'Peel Bananas The Burkiss Way’, in which you can learn the best techniques for peeling bananas and how to get people off lightly; 'Pass Examinations The Burkiss Way’, which teaches you how to astound your friends by appearing on shows like The Auntie Quiz and ‘Escape From Prison The Burkiss Way’ (‘The Burkiss Special with James Burkiss’); which sees the team proving to be experts on escaping from prison. There's also ‘Solve Murders The Burkiss Way’, in which The New Faces Impressionist Squad try to solve a murder; ‘Keep Unfit The Burkiss Way', featuring tips on putting on weight, being fat and being repellently ugly and ‘Win Awards The Burkiss Way’, where you could receive – absolutely free! – a Gullibility Award.