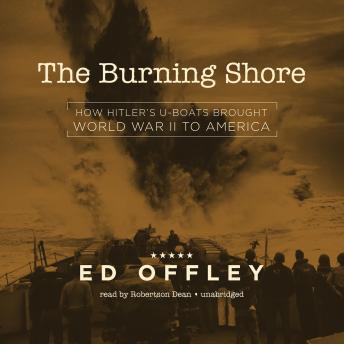 On June 15, 1942, as thousands of vacationers lounged in thesun on Virginia Beach, a massive fireball erupted from a convoy of oil tankerssteaming into Chesapeake Bay. By the next day, three ships lay at the bottom ofthe channel, victims of Lieutenant-Commander Horst Degen and his crew on theGerman submarine U-701.
In The Burning Shore, acclaimed militaryreporter Ed Offley presents a thrilling account of Degen's rampage along theAmerican coast and of US Lieutenant Harry J. Kane's quest to bring him down.Since the beginning of 1942, German U-boats had prowled the waters of theAtlantic, sinking merchant ships and threatening to sever the lifeline ofsupplies flowing from the United States to Great Britain. But when Kane and hiscrew spotted the silhouette of U-701 offshore that summer, the ensuing clashsignaled a critical turning point in the Battle of the Atlantic-and thebeginning of an unlikely friendship between the two rival commanders.
A gripping tale of heroism and sacrifice, TheBurning Shore describes how a small band of mariners and aviators droveHitler's wolf packs from America's home waters.