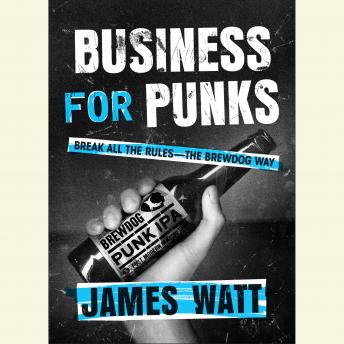 Business for Punks: Break All the Rules--the Brewdog Way

Forget about building a business—businesses fail and fade into oblivion. Start a revolution instead.

James Watt started a rebellion against tasteless mass market beers by founding BrewDog, now one of the world’s best-known and fastest growing craft breweries, famous for beers, bars, and crowdfunding. In this smart, funny book, he shares his story and explains how you too can tear up the rule book and start a company on your own terms. It’s an anarchic, DIY guide to entrepreneurship—and a new manifesto for business.

After spending seven years on the high seas of the North Atlantic, James Watt started BrewDog craft brewery in Scotland with his best friend, Martin Dickie. They didn’t have a business plan. All they had was a mis­sion to revolutionize beer drinking and make other people as passionate about craft beer as they are.

They’ve succeeded. Within a few years, BrewDog was huge—a world-famous craft brewery with beer bars around the globe and hundreds of thousands of fans. Those fans became literal backers of their business with the introduction of an unprecedented crowdfunding movement, Equity for Punks. And in rewriting the record books and kickstarting a revolution—James and BrewDog inadvertently forged a whole new approach to business.


Business for Punks bottles the essence of James’s methods in an accessible, honest mani­festo. Among his mantras:

·  Cash is motherf*cking king. Cash is the lifeblood of your company. Monitor every penny as if your life depends on it—because it does.
·  Get people to hate you. You won’t win by try­ing to make everyone happy, so don’t bother. Let haters fuel your fire while you focus on your hard-core fans.
·  Steal and bastardize from other fields. Take inspiration freely wherever you find it— except from people in your own industry.
·  Job interviews suck. They never reveal if someone will be a good employee, only how good that person is at interviews. Instead, take them for a test drive and see if they’re passionate and a good culture fit.

Business for Punks rethinks conventional business wisdom so you can go beyond the norm. It’s an anarchic, indispensable guide to thriving on your own terms.

Business for Punks: Break All the Rules--the Brewdog Way