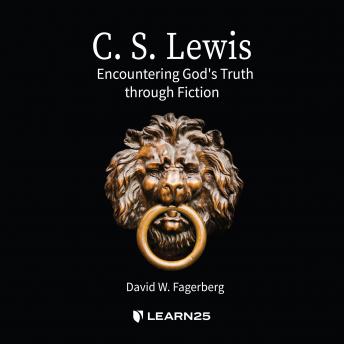 This course is a remarkable exploration of the most popular, and arguably most influential, Christian writer of the twentieth century.

An atheist for the beginning of his adulthood, C. S. Lewis later converted to Christianity and went on to become one of the most powerful Christian writers of his time, writing such quintessential apologetic works as Mere Christianity. Today, he is cherished by Christians and non-Christians throughout the world.

In this 15-lecture audio course, you will explore Lewis's fiction, discovering many of his most beloved works anew by examining them through a theological lens. By looking at such themes as the central doctrines of creation, the fall, the vices and the virtues, asceticism, and deification, you will come to a deeper understanding of Lewis's fiction.

First, you will begin with an explanation of these doctrines, discovering how they are illustrated in such works as The Screwtape Letters, The Great Divorce, Pilgrim's Regress, and The Space Trilogy. Then, you will look at Lewis's most popular novels, The Chronicles of Narnia. You will explore each book individually, concentrating on the theological teachings within each of them.

Transfiguration is the central point of the Christian life, but how can this developing transfiguration be expressed? Lewis powerfully illustrated this Christian idea in his fiction, with his genius for poetic images and dramatic narrative, which have resonated with readers of all ages across the decades.

This title is due for release on February 4, 2013
We'll send you an email as soon as it is available!