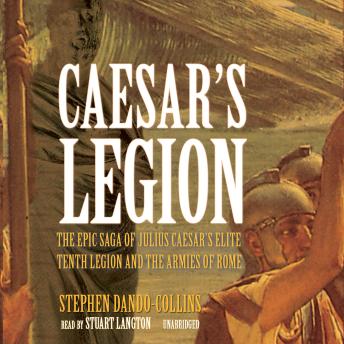 Caesar's Legion: The Epic Saga of Julius Caesar's Tenth Legion and the Armies of Rome

Stephen Dando-Collins paints a vivid and definitive portrait of daily life in the Tenth Legion, following Caesar and his men along the blood-soaked fringes of the Empire. This unprecedented regimental history reveals countless previously unknown details about Roman military practices, Caesar’s conduct as a commander and his relationships with officers and legionnaires, and the daily routine and discipline of the Legion.
From penetrating insights into the mind of history’s greatest general to a grunt’s-eye view of the gruesome realities of war in the Classical Age, this riveting true account sets a new standard of excellence and detail to which all authors of ancient military history will now aspire.

Caesar's Legion: The Epic Saga of Julius Caesar's Tenth Legion and the Armies of Rome