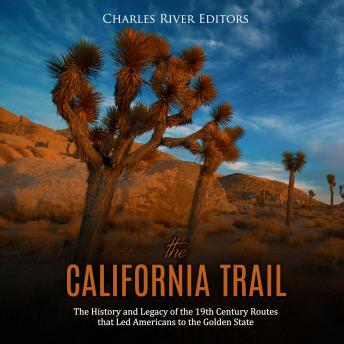 California Trail, The: The History and Legacy of the 19th Century Routes that Led Americans to the Golden State

The westward movement of Americans in the 19th century was one of the largest and most consequential migrations in history, and among the paths that blazed west, the California Trail was one of the most well-known. The trail was not a single road but a network of paths that began at several “jumping off” points.

As it so happened, the paths were being formalized and coming into use right around the time gold was discovered in the lands that became California in January 1848. Located thousands of miles away from the country’s power centers on the East Coast at the time, the announcement came a month before the Mexican-American War had ended, and among the very few Americans that were near the region at the time, many of them were Army soldiers who were participating in the war and garrisoned there. San Francisco was still best known for being a Spanish military and missionary outpost during the colonial era, and only a few hundred called it home. Mexico’s independence, and its possession of those lands, had come only a generation earlier.

At the same time, the journey itself was fraught with risk. It’s easy for people with modern transportation to comfortably reminisce about the West, but many pioneers discovered that the traveling came with various kinds of obstacles and danger, including bitter weather, potentially deadly illnesses, and hostile Native Americans, not to mention an unforgiving landscape that famous American explorer Stephen Long deemed “unfit for human habitation.” 19th century Americans were all too happy and eager for the transcontinental railroad to help speed their passage west and render overland paths obsolete.

While the Mexican-American War technically concluded with a treaty in February 1848, the announcement brought an influx of an estimated 90,000 “Forty-Niners” to the region in 1849, hailing from other parts of America and even as far away as Asia.

California Trail, The: The History and Legacy of the 19th Century Routes that Led Americans to the Golden State

This title is due for release on September 27, 2019
We'll send you an email as soon as it is available!