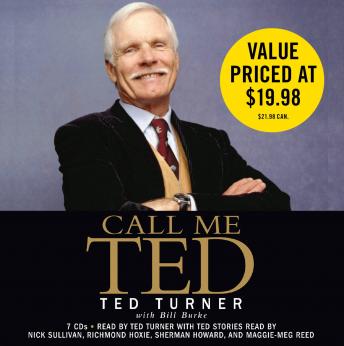 'Early to bed, early to rise, work like hell and advertise!'

These words of fatherly advice helped shape Ted Turner's remarkable life, but they only begin to explain the colorful, energetic, and unique style that has made Ted into one of the most amazing personalities of our time. Along the way - among his numerous accomplishments - Ted became one of the richest men in the world, the largest land owner in the United States, revolutionized the television business with the creation of TBS and CNN, became a champion sailor and winner of the America's Cup, and took home a World Series championship trophy in 1995 as owner of the Atlanta Braves.

An innovative entrepreneur, outspoken nonconformist, and groundbreaking philanthropist, Ted Turner is truly a living legend, and now, for the first time, he reveals his personal story. From his difficult childhood to the successful launch of his media empire to the catastrophic AOL/Time Warner deal, Turner spares no details or feelings and takes the reader along on a wild and sometimes bumpy ride.

You'll also hear Ted's personal take on how we can save the world...share his experiences in the dugout on the day when he appointed himself as manager of the Atlanta Braves....learn how he almost lost his life in the 1979 Fastnet sailing race (but came out the winner)...and discover surprising details about his dealings with Fidel Castro, Mikhail Gorbachev, Jimmy Carter, Bill Gates, Jack Welch, Warren Buffett, and many more of the most influential people of the past half century.

Ted also doesn't shrink from the darker and more intimate details of his life. With his usual frankness, he discusses a childhood of loneliness (he was left at a boarding school by his parents at the tender age of four), and the emotional impact of devastating losses (Ted's beloved sister died at seventeen and his hard-charging father committed suicide when Ted was still in his early twenties). Turner is also forthcoming about his marriages, including the one to Oscar-winning actress, Jane Fonda.

Along the way, Ted's friends, colleagues, and family are equally revealing in their unique 'Ted Stories' which are peppered throughout the book. Jane Fonda, especially, provides intriguing insights into Ted's inner drive and character.

In Call Me Ted, you'll hear Ted Turner's distinctive voice on every page. Always forthright, he tells you what makes him tick and what ticks him off, and delivers an honest account of what he's all about. Inspiring and entertaining, Call Me Ted sheds new light on one of the greatest visionaries of our time.

Incredible journey! Very informative and educational. It was amazing.

What a great book that was made even better by the fact that Ted narrated. A fascinating story about a very dynamic presence in the US. He overcame a number of personal obstacles to be very successful. His goal of giving to support different global initiatives is inspiring.

Ted Turner is my new idol! I was inspired by his drive, positive attitude, and energy. I could not wait to listen to it every day! I was sad when it ended. Great book!

What a fascinating story read beautifully by a fascinating man. The history of CNN and the change that has made in our daily lives is awe inspiring. This book kept me completely engrossed. I also had my 16 year old twin sons listen, as there are many life lessons in Mr Turner's life. He tells the story honestly, and it is particularly revealilng as he recounts his childhood, which makes the outcome of his adult life even more amazing. I would recommend this book to anyone who loves to hear how real people succeed in life and overcome early obstacles and use them for the good.

This title is due for release on November 10, 2008
We'll send you an email as soon as it is available!