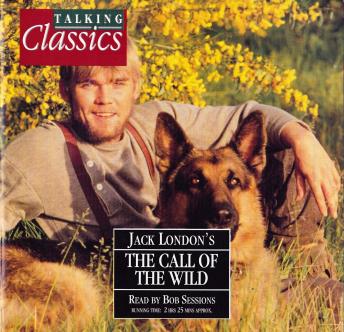 Call Of The Wild

Brimming with tense and violent incidents The Call Of The Wild traces the changes in the heart of Buck, the dog who grows from a pampered pet in California to a rugged fearsome and indomitable working dog in the far north. Primeval instincts surface in Buck, and only his affection for John Thornton, his one decent master, delays his return to the wild. Finally, after avenging his murdered friend, Buck takes over his true domain as leader of a wolf pack and runs free amidst the harsh landscape.

1. THE ABDUCTION. Buck, a huge cross-bred dog, half St Bernard and half Scotch shepherd, is happy in the sunny Santa Clara Valley of California. His master Judge Miller, treats him kindly and the other dogs and humans respect him. However, the gold- rush in the Klondike creates a demand for rugged, hard-working dogs, and Manuel, a devious servant, steals Buck. The dog has no reason to be suspicious when Manuel leads him away with a rope around is neck, but when he realises his fate, Buck becomes violent. Manuel sells the dog, who is then bundled on a train. Buck is carried north in a crate, in which he grows increasingly enraged. When it is opened, Buck leaps out snarling, only to be clubbed unconscious. Seeing the same happen to other dogs, he realises the power of the club. Buck is then sold to a Frenchman, Perrault, and continues his journey by ship. At their final destination, Buck sees snow for the first time.

2. INTO THE WILD. Buck is appalled by the savagery of the dog fights in Alaska. Spitz, a large white Spitzbergen dog, asserts his authority with ferocity over all the newcomers. Buck is harnessed on a sledge between two experienced dogs and learns quickly. However, he finds the life hard, and is constantly tired and hungry. On his first night, Buck attempts to sleep in a nearby tent but is driven out by Perrault and his friend Francois. Buck realizes that to keep warm, he must bury himself in the snow. Soon his muscles harden and his wild instincts are reawakened.

3. BATTLE FOR PRIMACY. Perrault drives his dogs hard in order to get to Dawson City, but he also treats them fairly, and makes leather shoes for Buck whose feet are still unused to the ice. Spitz, the team leader, senses a rival in Buck and tries to provoke a fight. Buck, in turn, begin to undermine Spitz's authority and ruins the team's cohesion. However, Buck is too clever to be caught misbehaving. Eventually the rivalry comes to a head when the pack is chasing a rabbit. Buck is leading, but Spitz short-cuts the group and gets to the prey. Buck charges him and is cut in the fight that follows. He then feints and breaks Spitz's left leg. Spitz is doomed by his injury and the other dogs tear him to pieces. Buck is now top dog.

4. HARD JOURNEY. The dog-team soon regains it unity under Buck's leadership and makes a record journey over the mountains down to the Gulf of Alaska. In the town of Skagway, the dogs are sold to a half-Scotsman, who drives them back to Dawson in terrible conditions. One night, while day-dreaming by the camp fire, Buck glimpses a primitive man beside him, his soul thrills with ancient passions. The next day Dave, another dog, falls ill due to the cold and is shot - such is the law of the wild and of survival. Returning to Skagway, the dogs expect a rest, but are sold to two Americans, Charles and Hal.

5. FOOLS AND THE HELM. The two men overload their sledge and the exhausted dogs fail to shift it. When on the move, their equipment tips over in the main road. After much unwanted advice from experienced onlookers, the Americans try again, with more dogs. However, they fail to take sufficient rations, and make matters worse by initially overfeeding the team. Finally, Hal cuts the dogs' ration and they grow weaker. Mercedes, Charles' wife becomes tired and insists on riding on the sledge, adding to the load. Several dogs die and the others become emaciated.

6. THE IDEAL MASTER. The team pulls into John Thornton's camp. He warns against crossing the nearly thawed White River, but Hal ignores him. Hal's dogs are so tired that he resorts to whipping them, but Buck refuses to move. Enraged at Hal's cruelty, Thornton knocks him down, and Buck is left behind. The team goes on, but the ice breaks and all drown. Buck, nursed by Thornton, becomes a loyal friend and protects his new master ferociously when 'Black' Burton, an evil-tempered miner, attacks. Soon after, Thornton makes a bet on Buck's strength and risks all his money.

7. HAPPINESS REGAINED. Buck wins the bet triumphantly by pulling a 1,000-pound sledge from standstill. With his winnings, Thornton and his friends head east to find a lost mine, and Bucks earns himself respect. Wandering through the wilderness, Buck is haunted by primeval visions. Thornton finally settles in a gold-rich valley.

8. BACK TO THE WILD. Woken one night by a wolf's howl, Buck goes in pursuit of it and makes friends with the wild beast. As he runs free, he suddenly remembers Thornton and rushes back to the camp. Soon, Buck begins to sleep in the wild and to track animals. One day he kills a bull moose, but on returning to camp discovers that Yeehat Indians have massacred everyone. Maddened, he rushes and kills as many Indians as he can before the rest flee. As night falls, wolves enter the valley. All Buck's ties to the civilized world are broken with Thornton's death, so after a bloody fight, he is accepted as the leader of the pack.

Call Of The Wild