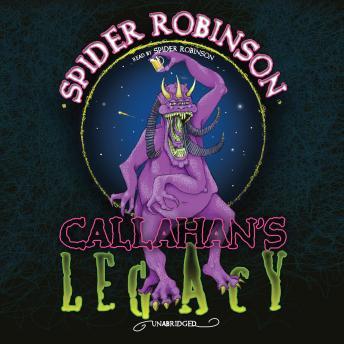 Twenty years since Spider Robinson first revealed the existence of Callahan’s Place, the original bar is gone. Mike Callahan is gone, too, but his spirit lives on in the new bar, named Mary’s Place for his daughter.
On this particular day, nothing seems to be going right for Jake Stonebender, proprietor of Mary’s Place. First a huge storm rips the roof off the bar—and moments later, drops another, better roof on it. Then, Mary Callahan and her husband show up, unconscious, literally out of nowhere, and they bring bad news to the barfolk: a nasty three-eyed, three-toed, three-everythinged purple monster is going to descend upon them within mere hours.
Through laughter and tears, with puns powerful enough to melt Formica, the most famous bar in all spacetime is going to rock this night. But will the Earth survive?