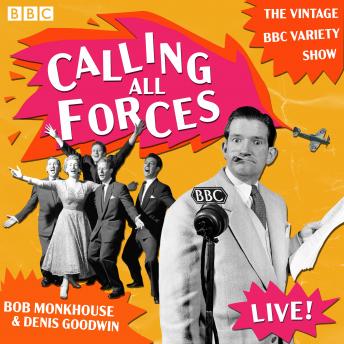 Broadcasting on the BBC Light Programme from December 1950 until July 1952, 'Calling All Forces' was the biggest show of its day, attracting the biggest names of the time. Written by a young Bob Monkhouse and Denis Goodwin, it became a showcase for aspiring young comedians including Peter Sellers, Tony Hancock, Jimmy Edwards, Cyril Fletcher, Benny Hill, Kenneth Horne, Bill Kerr and Bob Monkhouse himself.

Brilliantly hosted by comedian Ted Ray, the show features a mix of stand up comedy, music and sketches guest-starring well-known TV and film actors of the day. Peter Sellers tries out some early Goons characters, Tony Hancock steps in to co-host with Charlie Chester in the days before Hancock's Half Hour, and Bob Monkhouse steps on stage to perform some of his own material at the age of just 23. Sit back and enjoy musical hits from The Stargazers, songs performed by the 'Forces Sweetheart' Carole Carr, and amazing feats of recollection from 'The Memory Man' Leslie Welch as he answers sports questions sent in by British Forces stationed overseas. This rare collection offers a slice of post-war history, a window into pop culture in the British military forces of the time, and a fascinating look back at the early careers of our comedy greats.

This uproarious compilation also includes two bonus episodes of Fletcher's Fare, plus two episodes of The Forces Show - the successor to Calling All Forces, also written by Bob Monkhouse and Denis Goodwin.

Written by Bob Monkhouse and Denis Goodwin
Linking material written by Martin Gibbons and read by Roy McMillan
With thanks to the Estate of Bob Monkhouse, to the Tony Hancock Appreciation Society, and to Kaleidoscope for providing these audio recordings.

Please note: due to the age of these recordings, the sound quality may vary.
The humour in this programme reflects the era in which it was broadcast and may not reflect current attitudes.

This title is due for release on November 4, 2021
We'll send you an email as soon as it is available!