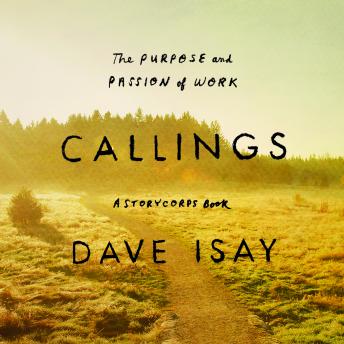 Callings: The Purpose and Passion of Work

In Callings, StoryCorps founder Dave Isay presents unforgettable stories from people doing what they love. Some found their paths at a very young age, others later in life; some overcame great odds or upturned their lives in order to pursue what matters to them. Callings is an inspiring tribute to rewarding work and the American pursuit of happiness.   We meet a cancer nurse who is able to teach others the meaning of love. We meet an African American NASCAR driver who found the courage to compete during the Jim Crow era. We meet a young man on the South Side of Chicago who became a teacher in order to help at-risk teenagers. Together they demonstrate how work can be about much more than just making a living, that chasing dreams and finding inspiration in unexpected places can transform a vocation into a calling. Includes StoryCorps segments originally broadcast by NPR, plus:Exclusive interviews with StoryCorps participants in careers ranging from gardener to forensic scientist.An insider's view of the heroic work at the Veteran's Crisis Hotline.Witness to an Execution, an award-winning documentary featuring first-hand accounts from the guards, chaplains and reporters who witness executions as part of their jobs.