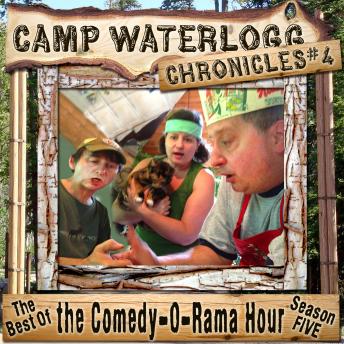 The Camp Waterlogg Chronicles 4: The Best of the Comedy-O-Rama Hour Season 5

The Camp Waterlogg Chronicles 4 containssix one-hour segments of the comic misadventures of Sgt. Lefty, Olive Pitts,Ellis the Boatkeeper, Squeaky Lkie, Stinky Peter, Mrs. Terwilliger, and all thewacky denizens of Camp Waterlogg, the dilapidated kids camp in the Catskills.The creation of husband and wife team Joe Bevilacqua (Joe Bev) and LorieKellogg, The Comedy-O-Rama Hour has evolved into a wacky mix of familyfriendly humor, radio theater, audio cartoons, and improvisation.
TheCamp Waterlogg Chronicles 4 includes: "The Honeymoon of Ellis and Elise," "Fireworksat Camp Waterlogg" parts 1 and 2, "Something Fishy at Camp Waterlogg or EllisGoes Native," "The Beluga Battles," and "We've Lost the Kids but Gained SomeChickens!"

Camp Waterlogg Chronicles 4: The Best of the Comedy-O-Rama Hour Season 5