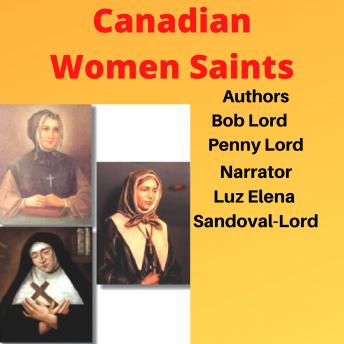 These are three women who made their marks upon the Church with the work they did among the natives Americans and with the children of Canada. They are Saint Marguerite Bougeoys, foundress of Sisters of Notre Dame, Saint Marie Marguerite D’Youville, the first Canadian-born Saint, and foundress of the Sisters of Charity in Canada, also known as the Grey Nuns, and Blessed Marie de l’Incarnation, Foundress of the Ursuline sisters in Canada.

These brave women were not only driving forces behind bringing the Word of God and the Church to Canada, but they were instrumental in forging the civilization of Canada, and North America. Blessed Marie came in 1639, Saint Marguerite Bougeoys came in 1653, and Saint Marie Marguerite d’Youville was born in Canada in 1701. The timeline of their lives, are the most difficult in the history of the country and the Church in Canada. They were under attack from all sides. Between the British, who were trying to conquer Canada for the Crown, the Protestants, Anglicans and Calvinists, who hated the Catholic Church, and the Native Americans, who feared these intruders, and hated what they were trying to do to their land, the task seemed impossible.