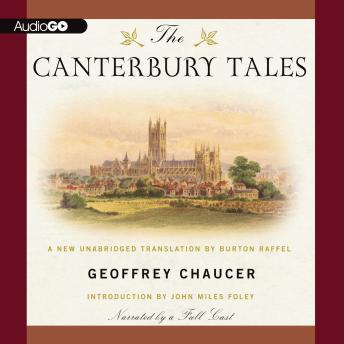 Beyond its importance as a literary work of unvarnished genius, Geoffrey Chaucer’s unfinished epic poem is also one of the most beloved works in the English language—and for good reason: it is lively, absorbing, perceptive, and outrageously funny. But despite the brilliance of Chaucer’s work, the continual evolution of our language has rendered his words unfamiliar to many of us. Esteemed poet, translator, and scholar Burton Raffel’s magnificent new unabridged translation brings Chaucer’s poetry back to life, ensuring that none of the original’s wit, wisdom, or humanity is lost to the modern reader. This edition also features an introduction by the widely influential medievalist and author John Miles Foley that discusses Chaucer’s work as well as his life and times.

“Chaucer’s blend of humour, realism, philosophical depth, poetic virtuosity, and masterful control of dialogue and character was never matched…As a storyteller, he is supreme.”--Cambridge Guide to Literature in English