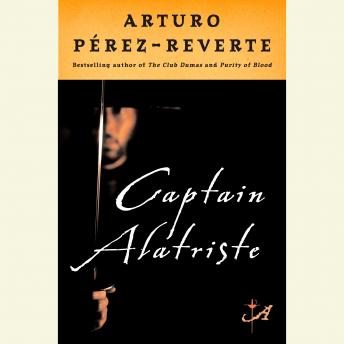 The novels of Arturo Pérez-Reverte have captivated readers around the world and earned him a reputation as “the master of the intellectual thriller.” (Chicago Tribune) His books have been published in fifty countries. Now, beginning with Captain Alatriste, comes Pérez-Reverte’s most stunning creation to date: a riveting series featuring the adventures of an iconic hero.

Captain Alatriste is the story of a fictional seventeenth-century Spanish soldier who lives as a swordsman-for-hire in Madrid. Needing gold to pay off his debts, Alatriste and another hired blade are paid to ambush two travelers, stage a robbery, and give the travelers a fright. “No blood,” they are told.Then a mysterious stranger enters to clarify the job: he increases the pay, and tells Alatriste that, instead, he must murder the two travelers. When the attack unfolds, Alatriste realizes that these aren’t ordinary travelers, and what happens next is only the first in a riveting series of twists and turns, with implications that will reverberate throughout the courts of Europe.

This title is due for release on February 10, 2005
We'll send you an email as soon as it is available!