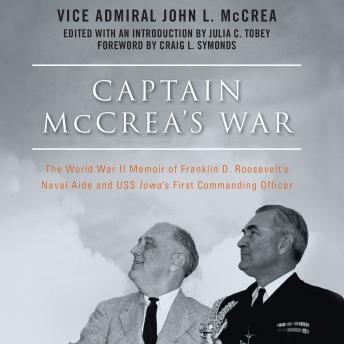 Vice Admiral John L. McCrea worked with the president of the United States on difficult and unusual assignments, associated with royalty and world-famous political and military leaders, and he commanded the USS Iowa and a task force in the Pacific. Over the years, many urged him to write a book, and before his passing he finally recorded his reminiscences. Captain McCrea's War captures his amazing tales from the World War II years.

After the United States entered the war, McCrea served as a naval aide to President Franklin D. Roosevelt, where he set up the White House Map Room (later known as the Situation Room) and Shangri-La (now called Camp David). He supplied material for the president's fireside chats, helped arrange the Casablanca Conference, and worked with such prominent leaders as Winston Churchill and General Douglas MacArthur.

Despite his important work for the president, McCrea yearned for sea duty. Persuading FDR to release him from the White House, he was given command of the USS Iowa, the country's newest and largest battleship. With his new ship, McCrea transported Roosevelt and the joint chiefs of staff across the Atlantic for the Tehran Conference and fought with the Fast Carrier Task Force in the Pacific. Captain McCrea's War ends in April 1945, when McCrea was summoned back to Washington after President Roosevelt's death.