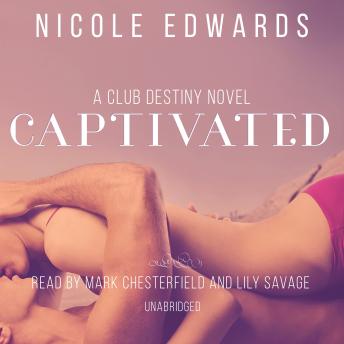 Captivated offersa glimpse into the lives of Lucie Werner and Kane Steele, first seen in booktwo of the Club Destiny series-Temptation.
Lucie Werner's life has never followed the path sheenvisioned for herself, and five years ago it veered off course yet again-thistime after one erotic night of passion with the man she'd been captivated bysince the day they'd met. Only Kane doesn't remember that night, anduntil recently, he didn't know that what they'd shared resulted in the birth of a beautiful little girl. Now that he does, Lucie fears he'llnever want anything to do with her again because she kept it secretfrom him for so long. The sad truth is, she wouldn't blame him.
Kane Steele had never known the type of rage he was consumedby when Lucie told him he was a father-and that she had kept his daughter asecret from him for nearly five years. Although he can't remember the events ofthat fateful night, Kane can't ignore the feelings he's had for Lucie allthis time. Now, with the secret out and his relationship with his daughter onthe mend, he finds he still can't fight what he feels for her. Since hismemories of that night are out of reach, Kane's ready to make some newones.
Can the two of them overcome Lucie's deceit and give in tothe maelstrom of heat between them? Will Lucie beable to overcome the guilt she feels for keeping this monumental secret for solong? And will Kane be able to forgive her?