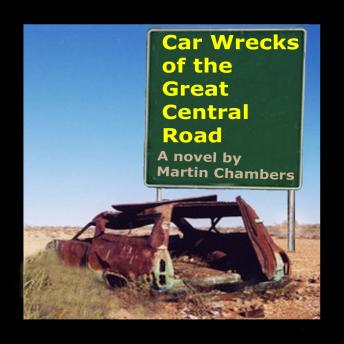 At any age, in any age, we could all fall by the highway of life. Charlie and Angel are two such teenagers, who break the monotony of their foster home life by breaking into houses. When a burglary goes wrong, they escape in a stolen van along the Great Central Road. What follows, just as they are beginning find somewhere to belong, is murder and a ruthless international crime syndicate.
They meet two German tourists who have broken down, and together the four of them travel the Great Central Road.
As Angel learns to use the camera she has also stolen, she discovers a special affinity for photography. She practices on the abandoned cars they find by the road, and perhaps because she also feels abandoned she seems to have a special talent for this.
At Warburton they meet a community of desert artists. One of them, Daisy, encourages Angel to exhibit her photographs in an exhibition in Alice Springs commemorating the 50th anniversary of The Great Central Road.
In Alice Springs they set to work to produce posters for the exhibition. Both Charlie and Angel are at last beginning to feel as if they belong somewhere. But the acceptance is short lived when the owner of the gallery is found murdered and suspicion turns on Charlie.
Feeling as if they can never escape their past, they are about to flee when Charlie is arrested.
With the help of the two Germans Angel uncovers the real culprits, a gang of ruthless international art thieves whose crimes put their own misdemeanors in perspective.