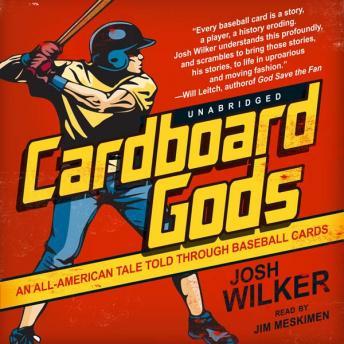 Cardboard Godsis the memoir of Josh Wilker, a brilliant writer who has marked the stages ofhis life through the baseball cards he collected as a child. It also capturesthe experience of growing up obsessed with baseball cards and explores what itmeans to be a fan of the game. Along the way, as we get to know Josh, hisfamily, and his friends, we also get Josh's classic observations about thecentral artifacts from his life-the baseball cards themselves.
Josh writes about an imagined correspondence with hisfavorite player, Carl Yastrzemski; he uses the magical bubble-blowing powers ofjourneyman Kurt Bevacqua to shed light on the weakening of the powerfulchildhood bond with his older brother; he considers the doomed utopianback-to-the-land dreams of his hippie parents against the backdrop ofinimitable 1970s baseball figures such as pinch runner Herb Washington and Mark"The Bird" Fidrych. Cardboard Gods ismore than just the story of a man who can't let go of his past, it's proofthat-to paraphrase Jim Bouton-as children we grow up holding baseball cards,but that in the end, we realize it's really the other way around.

This title is due for release on July 21, 2010
We'll send you an email as soon as it is available!