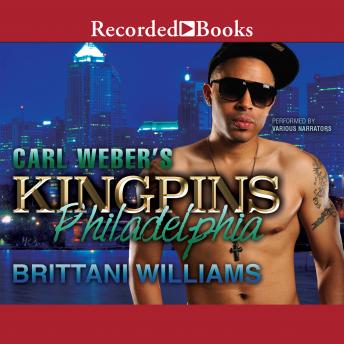 Carl Weber brings the best of Urban street lit authors together, each telling their own dramatic tale of life in the streets in cities across the USA. The third installment continues with veteran Urban Books author Brittani Williams. Dontay had it rough growing up in the projects with a mother who forced him to become a man at the young age of fifteen. His father was a rolling stone, having multiple children with many women. He always fought for his father's attention, until taking his spot became more important than gaining his love. Now Dontay is the leader of one of the most successful and most feared drug organizations in the city of Philadelphia. From the outside looking in, he appears to have it all-tons of money, respect, and women falling at his feet-but it all comes with a hefty price. He meets Desire, a biracial beauty, and instantly vows to make her his queen. Unfortunately, trouble is lurking, and Desire may not be the woman she claims to be. A war ensues with a rival drug gang, and Dontay reigns supreme, but he begins to lose the tight grip that he has on his organization as he struggles to find the person responsible for leaking details of his activities to the feds. With jealousy, envy, and revenge as motives, one of his most trusted understudies moves forward with a plan of takeover that quickly leaves Dontay without the things that he's worked his whole life to attain. In this fast-paced tale of deceit, nothing is what it seems, and Dontay learns that even his own family can't be trusted. Filled with drama, lies, sex, and police corruption, Carl Weber's Kingpins: Philadelphia makes it clear that even for a kingpin, more money means more problems.