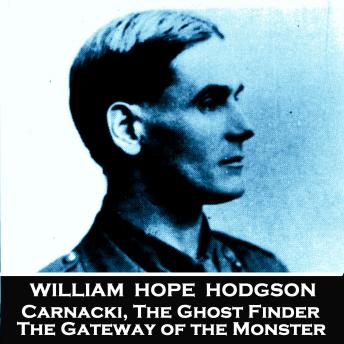 Carnacki, The Ghost Finder - No 1 - The Gateway of the Monster

William Hope Hodgson was born in Essex, England on November 15th, 1877.Over his short career he produced a large body of work which explored and covered many genres. From horror, to science fiction, to stories on the sea, where he had spent much of his early life.In 1899, at the age of 22, he opened W. H. Hodgson's School of Physical Culture, in Blackburn offering tailored exercise regimes for personal training. Eventually the business shut down and he immersed himself in writing. An article in 1903 'Physical Culture versus Recreative Exercises' led the way into fiction writing. In 1904 came his first short story 'The Goddess of Death'. It was the beginning of an intensely creative period in his life. He wrote novels, poetry and many, many short stories including series on the Sargasso Sea and Captain Gault.One of his most memorable creations was his Carnacki, Supernatural Detective creation. This fused together his passion for sleuthing and interest in the Occult. It was a memorable success.When war drew its shadow over Europe Hodgson received a commission as a Lieutenant in the Royal Artillery. In 1916 he was thrown from a horse and suffered a serious head injury; he received a mandatory discharge, and returned to writing.Hodgson recovered sufficiently to re-enlist but at the Battle of Ypres in April 1918 he was killed by an artillery shell.

Carnacki, The Ghost Finder - No 1 - The Gateway of the Monster