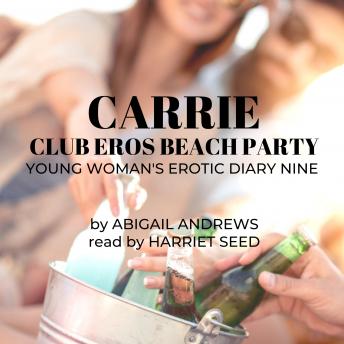 Erotic Story read by Harriet Seed.Entry from Carrie's Diary: Tim and me belonged to Club Eros in London, a sex club for those of us that wanted something a little different. It was an upmarket sex club with a discrete membership of mainly couples with money, couples of all ages. Tim had introduced me: he'd been a member for some time. Tim had started taking me around as his girlfriend, although we both loved fun and had an open relationship. He was good looking, intelligent, had a good city job and seemed to have money to splash when he wanted. He was also kind and thoughtful and looked after me when we were out together, opening doors, that sort of thing.And I'd met Tim after him and his three friends from the city booked me for some entertainment in an upmarket hotel. It was fun, I'd never had four guys simultaneously. Of course, I'd been nervous at first but they were just four young guys wanting to have some fun. They had money to spend, lots, and who was I to turn them down.Now I had come to Spain for two weeks, a vacation I felt I deserved, and just before the schools finished and this resort became flooded with families. I wanted some peace and rest away from the city hubbub. Tim had found out when he phoned me to arrange meeting up. I told him I was away in Spain. I told him I'd be back when the two weeks were up and I'd see him then. I was here on my own for the first week, then Gwen my lovely friend was coming over for the second week. I knew we'd have some fun in the sun. I'd been here about four days and my anticipated relaxation had turned into a regular journey of sexual adventures. This was not unusual. I seemed to attract guys and girls and couples who wanted something different as you will know if you've read any of my previous diary entries. But that's another story.What I've not told you is that Tim turned up yesterday unexpectedly. He just knocked on my hotel room door and I was shocked but happy. I love having him around. Yesterday we bumped into a couple who belonged to Club Eros, the same sex club as us in London. WE knew they belonged to Eros because we all have a small tattoo and I noticed the woman had on her back. They were here for a beach sun, sea and sex party with others who were coming from London.This is what happened next. It's a long entry for this episode and you'll realise I've not missed anything out. Enjoy!Not suitable for minors or those who dislike explicit graphic sexual descriptions