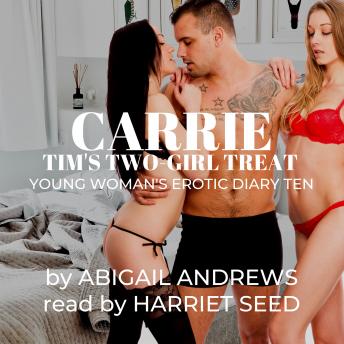 I'm Carrie White, some call me a nymphomaniac, and I guess they are right. I love sex. Been here on vacation in Spain for a few days and already attended a beach sex party, made out with a stranger I met on the plane, has sex with a guy whose wife was in a wheelchair. And ten more days to go.

Here is part of my diary for today:


“So, have you been out with any guys since you’ve been here?” I asked

“No! I haven’t” she sounded disappointed. “My friends at home think I’m having a riot here. They know about my boyfriend but think I’m out having fun with new guys every night. If only” she said with a sign. “I’m breaking up with him and concentrating on me” she said.

I couldn’t believe this. I thought I was going to struggle here but it was beginning to look good. I thought I could chance my arm. “Hey. Do you want to come out tonight with Tim and me? We’ll have a meal and maybe a club, then back to our room for some drinks and fun” She looked at me.

“Well you know. We’ll sit and have a few drinks, might play a game or two”

“Ok well sometimes they get personal. If you don’t want to come then let’s forget it.”

“No!” she quickly answered. “I need some fun. I told you I’ve not been out. Maybe I’ve kept to myself too much” she went on. “I think I want some fun. And I think you might be able to provide that”

We arranged to meet later, after she finished her shift and got ready to go out.

I didn’t tell Tim about Abbie until we were just going out. I had said I wanted to go clubbing for a bit as this was his last night here. He cheered up at that. “I thought I was going to be in the dog-house until I left!” he said.

“No! of course not, now we understand the situation. I really like you Tim, but I don’t want a one to one relationship yet. It’ll work out, don’t worry. Oh! Bye the way Abbie from the Reception Desk is tagging along. I hope that’s ok” I said. “She is on her own here and I thought we could cheer her up.” I didn’t tell him how I wanted to cheer her up!

“Oh, the brunette with the tits”

“Tim” I interrupted, “Is that all you think about when you look at a girl” He looked at me and grinned.

“I guess so” he answered.