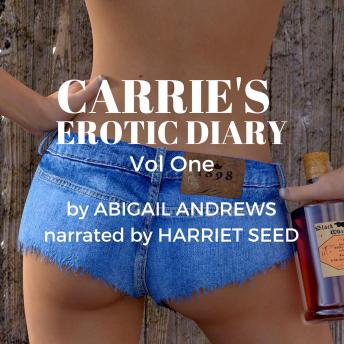 Carrie arrives in London looking for work and through the first few days discovers that she is a nymphomaniac. This is not suitable for minors and this who would be offended by sexually graphic descriptions. Over 3 hours listening.

CARRIE’S EXHIBITION STAND Carrie is working on an exhibition stand at a national show. She is attracted to the sales manager, in charge of the stand and he makes a pitch for her. She accepts his invitation to dinner and finds herself in the sexually charged situation that she’d wanted so badly.

RICHARD FOUND AND TRAINED ME This flashback story is about hoe Carrie arrived in London. Staying in a cheap hotel and seeking out work. She meets Richard, a photographer who leads her down the rocky road where she discovers how she loves sex.

CARRIE’S LESBIAN ADVENTURE Carrie is working with Gwen who has been doing different jobs in and on the fringe of the sex industry. Carrie stays over and suddenly they are fumbling with each other in bed and that’s where the excitement begins.

CARRIE SERVED HOT The advert was for a serving wench. The job was to serve four sex hungry, high on success financier guys in a private suite in a top hotel where they had their end of month meal. £1500 was what Carrie would be paid and she realised why when they told her that she was the dessert.

CARRIE AT CLUB EROS  Carrie was taken along to Club Eros, a sex club in London. Tim was a member and thought Carrie would enjoy being there. Enjoy it! She loved it and threw herself into the atmosphere enjoying one of the other women, making an exhibition of themselves in a lesbian frenzy.