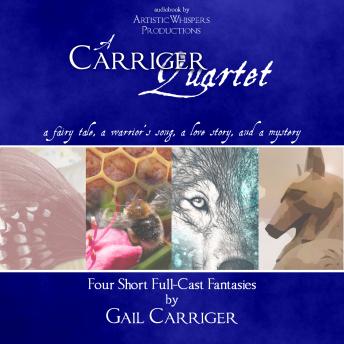 
The Curious Case of the Werewolf That Wasn't, the Mummy That Was, and the Cat in the Jar
A mummified cat, a secret agent, and an aristocrat entangle Alessandro Tarraboti (father of Alexia Tarraboti from the Parasol Protectorate series) in a rollicking, wry adventure into the supernatural secrets of ancient Egypt.


Marine Biology
Inconveniently a werewolf, unexpectedly alive, and secretly gay, marine biologist Alex finds himself forcibly shackled to a flirty merman on the hunt for some sinister selkies. An unconventional romance between impossible partners told with the kind of wit and comedy that made Gail a household name.


Fairy Debt
Despite being a fairy, Cups can't grow wings due to a death promise to a local king. Entering service in his castle as the Least Jester, she must find a way to earn her wings while navigating the hazards of cupcakes, tea demons, and the occasional Earth dragons.


My Sister's Song
Fantasy, history, and subversive strategy collide in this Roman-era tale of a warrior, Mithra, who must repel an entire legion alone and armed only with a very peculiar weapon. Her sticky solution to this impossible problem must be heard to be believed.

This title is due for release on January 13, 2016
We'll send you an email as soon as it is available!