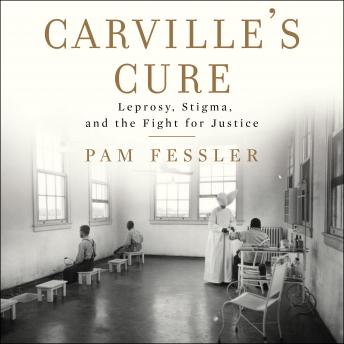 Carville's Cure: Leprosy, Stigma, and the Fight for Justice

Following the trail of an unexpected family connection, acclaimed journalist Pam Fessler has unearthed the lost world of the patients, nurses, doctors, and researchers at Carville who struggled for over a century to eradicate Hansen's disease, the modern name for leprosy. Amid widespread public anxiety about foreign contamination and contagion, patients were deprived of basic rights-denied the right to vote, restricted from leaving Carville, and often forbidden from contact with their own parents or children.

Though shunned by their fellow Americans, patients surprisingly made Carville more a refuge than a prison. Many carved out meaningful lives, building a vibrant community and finding solace, brotherhood, and even love behind the barbed-wire fence that surrounded them. Among the memorable figures we meet in Fessler's masterful narrative are John Early, a pioneering crusader for patients' rights, and the unlucky Landry siblings as well as a butcher from New York, a nineteen-year-old debutante from New Orleans, and a pharmacist from Texas. Though Jim Crow reigned in the South and racial animus prevailed elsewhere, Carville took in people of all faiths, colors, and backgrounds. Aided by their heroic caretakers, patients rallied to find a cure for Hansen's disease and to fight the insidious stigma that surrounded it.

Carville's Cure: Leprosy, Stigma, and the Fight for Justice