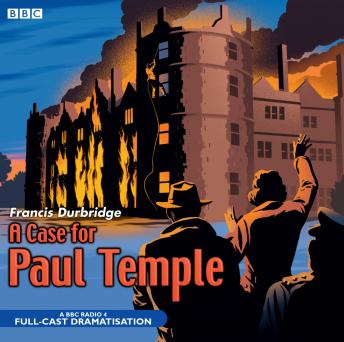 A Case For Paul Temple

From 1938 to 1968 crime novelist and detective Paul Temple and his Fleet Street journalist wife Steve solved case after case in one of BBC Radio’s most popular series. Now the glamorous duo return to the airwaves to break a mysterious drug-running gang. Post-war London is buzzing with speculation about the deaths of ten young drug addicts within the space of just one week. The police are desperate to cut off supplies of heroin and cocaine to the capital, but they are struggling. So Sir Graham Forbes turns to Paul Temple. By fast car and police launch, on deserted houseboats and midnight beaches, in dodgy East End pubs and smart West End restaurants, braving booby traps, bullets and blazing houses, Paul and Steve pursue the ruthless and feared drug dealer known only as ‘Valentine’. This new production for BBC Radio 4 uses the original scripts, vintage sound effects and much of the original incidental music from the missing 1946 production. As far as possible it is a technical and stylistic replica of how that production might have sounded if its recording had survived.