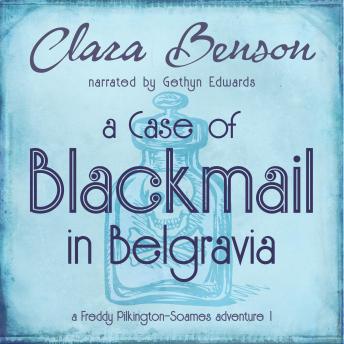 A Case of Blackmail in Belgravia

It's 1929, and Ticky Maltravers is the toast of London high society, adored by everyone - or so it seems, until somebody poisons him over dinner. Now it turns out that numerous people with secrets to hide had every reason to wish him dead. But which of them murdered him? For Freddy Pilkington-Soames, newspaper reporter and man-about-town, the question hits a little too close to home, thanks to an unfortunate drunken encounter with Ticky's corpse which he'd much rather the police didn't find out about - and thanks also to his exasperating mother Cynthia's seeming determination to get herself arrested by tampering with the evidence. But a pretty girl with big blue eyes is demanding his help in solving the mystery, so what can he do but agree? Now all he has to do is hide the wrong clues, find the right ones, and unmask the murderer before the police discover what's really been going on. That ought to be easy enough. If only people didn't keep getting killed...

Case of Blackmail in Belgravia

This title is due for release on April 17, 2017
We'll send you an email as soon as it is available!