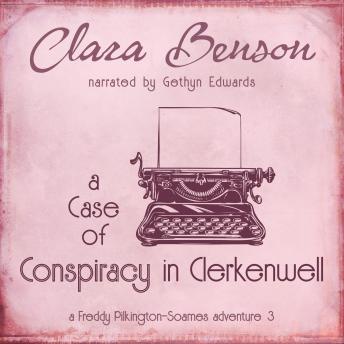 A Case of Conspiracy in Clerkenwell

The ladies of Clerkenwell Central Hall are none too pleased at having their Temperance meetings disrupted by the rowdy Communists next door, but for Miss Olive Stapleton in particular, the uneasy coexistence proves fatal when she is found stabbed through the heart with a paper-knife. Enter Freddy Pilkington-Soames, who's been recruited by British Intelligence to investigate a suspected Communist plot to stir up a general strike. Freddy thinks there's more to Miss Stapleton's death than meets the eye, but as he delves more deeply into the mystery it only becomes more puzzling. What is the connection between the murder and the coded newspaper advertisements? Is a Welsh firebrand politician really as harmless as he seems? And what does the beautiful wife of an Austrian revolutionary philosopher want from him? It all points to one thing: danger ahead. But time is running out, and Freddy must act fast to stop the conspirators, or risk becoming the unwitting pawn in a deadly game that threatens to bring the country to its knees.

Case of Conspiracy in Clerkenwell