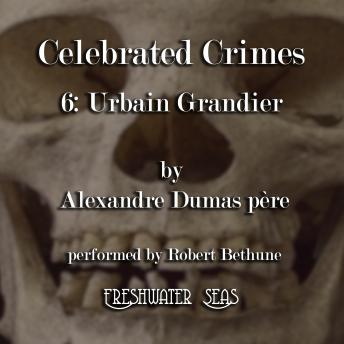 In this, the sixth of the series, Dumas tells the story of Urbain Grandier, a Catholic priest, little known to the English-speaking world, but famous among French speakers; he was the target of a religous and political conspiracy that began among his personal and political enemies in the town of Loudon and ended at the highest levels of political and religious power in the kingdom of France, with the direct involvement of Cardinal Richelieu and possibly of the king himself.

Grandier was handsome; Grandier was magnetic; Grandier was highly attractive to women. He was also arrogant, vindictive, and bitterly exacting of every jot and tittle of his rights. These qualities ran him foul of the religious and political bigwigs of the small, provincial town of Loudon. He made many enemies; they made up their minds to kill the man, and kill him they did.

They plotted to create the appearance of witchcraft on the loose by arranging for what would look like demonic possession among the nuns of the Ursuline convent at Loudon, so that they could pin a charge of witchcraft on Grandier. However, once they turned their wild horses loose, they had no choice but to ride them; what began as a personal vendetta turned into a devil's nightmare of a lurid witchhunt and trial.

Though Dumas clearly takes Grandier's part, he is quite objective about how Grandier, faced with a noose strung up by his enemies, could not restrain himself from putting his head into it and grinning. Dumas shows clearly how his enemies went to work with a will to do what has necessary from that point. In this volume, he is less then novelist than the historian, but he brings all the figures involved fully to life. He leaves us shaking our heads at the depths of murderous passion and barbarous cruelty hidden under the mask of religious fervor.

This title is due for release on August 29, 2014
We'll send you an email as soon as it is available!