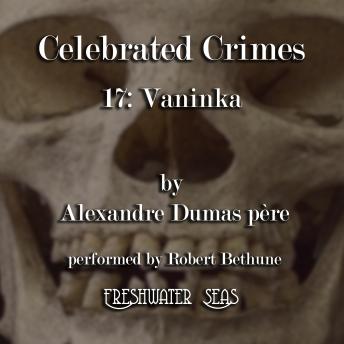 To paraphrase the note from the translator, The Celebrated Crimes of Alexandre Dumas père was not written for

children. The novelist has spared no language—has minced no words—to describe violent scenes of violent times.

In this, the seventeenth of the series, Dumas, in this case more a novelist rather than a historian, turns his

attention to a story from Russia: that of Vaninka. Her father was a Russian count and a general in the Russian

Imperial army under Paul I. She falls in love with one of her father's officers, whose tragic but accidental death

leads her to a savage crime. Ironically, bringing her to justice requires a great perversion of justice itself.

This story is historical romance, not history. It does show us something of the life of Russia at the time, and

takes a side trip through part of the Napoleonic wars, but the focus is firmly on the price a beautiful young girl

pays for her arrogant willingness to play fpr keeps with human hearts.

Dumas may have collaborated on this, as he frequently did in his works, with other writers. Nevertheless, it is

clearly Dumas who has the final say on this work, as with all the other works in this series.

This title is due for release on July 22, 2015
We'll send you an email as soon as it is available!