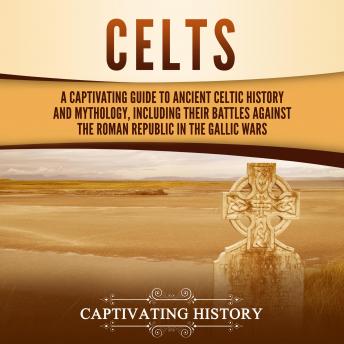 Celts: A Captivating Guide to Ancient Celtic History and Mythology, Including Their Battles Against the Roman Republic in the Gallic Wars

If you want to discover the captivating history of the Celts, then pay attention...
Today, the word Celtic means so many things. To most of us, it means something related to Ireland. We think of intricately designed Irish crosses, four-leaf clovers, and some of the more well-known stories of Celtic mythology. However, while Celtic culture has stayed alive in Ireland, its roots run much deeper, and they extend much farther than the small island nation off the coast of modern-day Great Britain.
The story of the Celts is one of a rapid rise to prominence followed by a slow decline due to the influence of the Romans. But even so, Celtic culture has remained strong in Europe and has been able to persist to this day. So, even though the Celts represent just a small part of today's modern world, they are a massive part of its history, which means that studying the ancient Celts today is a great way to unlock some of the secrets buried in the depths of ancient history.
In Celts: A Captivating Guide to Ancient Celtic History and Mythology, Including Their Battles Against the Roman Republic in the Gallic Wars, you will discover topics such as
Who Were the Celts?The Celtic MigrationsThe Many Celtic Tribes of EuropeThe CeltiberiansThe Gallic WarsThe Insular CeltsCeltic WarriorsCeltic Way of LifeCeltic ReligionCeltic ArtAnd much, much more!So if you want to learn more about the Celts, scroll up and click the 'add to cart' button!

Celts: A Captivating Guide to Ancient Celtic History and Mythology, Including Their Battles Against the Roman Republic in the Gallic Wars