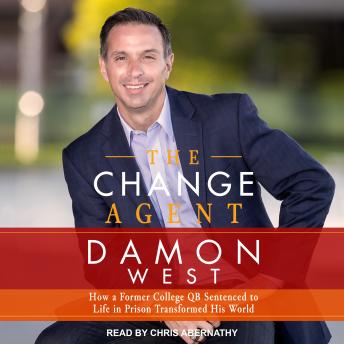 The Change Agent: How a Former College QB Sentenced to Life in Prison Transformed His World

Sentenced to sixty-five years in a Texas prison, Damon West once had it all. He came from a great family, in a home full of God, love, support, and opportunities to reach any goal. A natural born leader, an athlete with good looks and charm, he appeared to be the all-American kid pursuing his dreams.

Underneath this facade, however, was an addict in the early stages of disease. After suffering childhood sexual abuse by a babysitter at the age of nine, Damon began putting chemicals into his body to alter the way he felt.

Once he was introduced to methamphetamines, however, he became instantly hooked-and the lives of so many innocent people would forever be changed by the choices he made in order to feed his insatiable meth habit.

After a fateful discussion during his incarceration with a seasoned convict, Damon had a spiritual awakening. He learned that, like a coffee bean changing with the application of heat and pressure, he was capable of changing the environment around him. Armed with a program of recovery, a renewed faith, and a miraculous second chance at life, Damon emerged from over seven years of prison a changed man. His story of redemption continues to inspire audiences today.

Change Agent: How a Former College QB Sentenced to Life in Prison Transformed His World