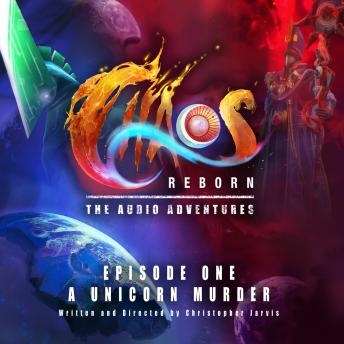 Chaos Reborn - The Audio Adventures
Chaos Reborn - The Audio Adventures is the exciting new videogame adaptation from the producers of Elite: Escape Velocity. Featuring Andy Secombe (Star Wars Episode I The Phantom Menace) and Samantha Béart (Hitchhikers Guide to the Galaxy) and based on Julian Gollop's game of Wizard battles.
Episode One - A Unicorn Murder
The wizard, Dagan, is continually defeated in his attempts to rid the realm of a cruel master. Broke and desperate for new equipment, Dagan finds himself in the Unicorn-racing town of Mana Falls, where intrigue, murder and suspicion lie around every corner.
When a high profile member of the community is murdered, Dagan finds himself as the prime suspect. Will the wizard's mission be overturned by humanity's laws - and can Dagan determine his own fate before marauders, banishing charms and goblins decide it for him?
The Download edition features the full episode and behind the scenes extras in a variety of DRM-free MP3 bitrates for your choice of quality and storage convenience. It also comes with a PDF information booklet, featuring photos from the production and notes from the director.

This title is due for release on November 29, 2018
We'll send you an email as soon as it is available!