Charlatan: America's Most Dangerous Huckster, the Man Who Pursued Him, and the Age of Flimflam 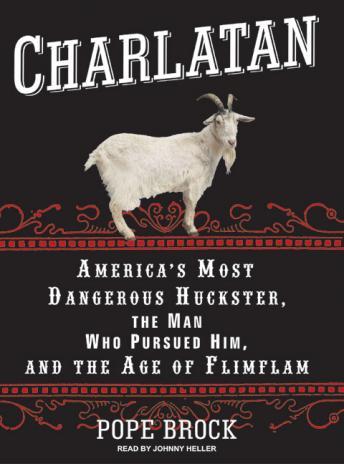 The rise and fall of the greatest medical con man of all time.

This is the enormously entertaining story of how a fraudulent surgeon made a fortune by inserting goats' testes into impotent American men. 'Doctor' John Brinkley became a world renowned authority on sexual rejuvenation in the 1920s, with famous politicians and even royalty asking for his services. His nemesis was Dr. Morris Fishbein, editor of the Journal of the American Medical Association, but it took him fifteen years to destroy Brinkley in a dramatic courtroom showdown. In the meantime, despite mounting evidence that his quack treatments killed many patients, Brinkley became a millionaire, and his pioneering use of radio not only kick-started country music as a national force in America but also invented the whole concept of radio advertising. He became the first politician to campaign over the airwaves when he ran for governor of Kansas.

Charlatan: America's Most Dangerous Huckster, the Man Who Pursued Him, and the Age of Flimflam