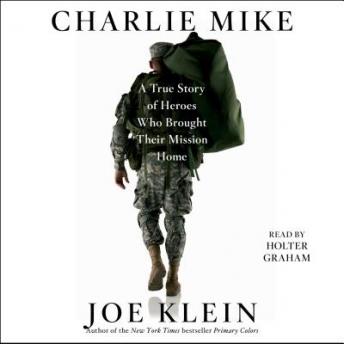 Charlie Mike: A True Story of War and Finding the Way Home

This true story of two decorated combat veterans who find a new way to save their comrades and heal their country is “a great look at two of the best veteran organizations going and the incredible humans who make the effort work” (Jon Stewart).

In Charlie Mike, a true account that “reads like a novel” (Publishers Weekly) and “explodes like a thriller” (The Huffington Post), Klein tells the dramatic story of Eric Greitens and Jake Wood, larger-than-life war heroes who come home and use their military values to help others.

Wounded in Iraq, Navy SEAL Eric Greitens returns home to find that his fellow veterans all want the same thing: to continue to serve their country. He founds The Mission Continues to provide paid public service fellowships for wounded veterans. One of the first fellows is former Marine sergeant Jake Wood, a natural leader who begins Team Rubicon, organizing 9/11 veterans for dangerous disaster relief projects around the world. “We do chaos,” he says.

“A deep and compelling exploration of a group of young veterans determined to continue serving after leaving the military” (The Washington Post), this is a story that hasn’t been told before—a saga of lives saved, not wasted. The chaos these soldiers face isn’t only in the streets of Haiti after the 2010 earthquake or in New York City after Hurricane Sandy—it’s also in the lives of their fellow veterans. Charlie Mike shows how Greitens and Wood draw on the military virtues of discipline and selflessness to guide others towards inner peace and, ultimately, to help build a more vigorous nation.