The Charming Quirks of Others 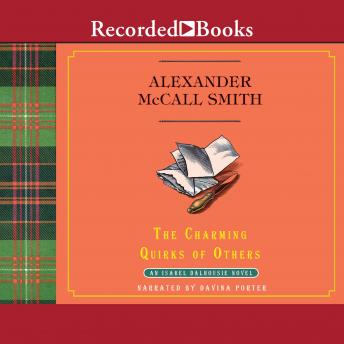 Nothing captures the charm of Edinburgh like the bestselling Isabel Dalhousie series of novels featuring the insatiably curious philosopher and woman detective. Whether investigating a case or a problem of philosophy, the indefatigable Isabel Dalhousie, one of fiction's most richly developed amateur detectives, is always ready to pursue the answers to all of life's questions, large and small. Isabel has been asked to discreetly investigate the candidates for the position of headmaster at a local boys' school. The board has three final candidates but has received an anonymous letter alleging that one of them is not suitable.What she discovers about the candidates is surprising, but what she discovers about herself and about Jamie, the father of her young son, turns out to be equally revealing. Isabel's investigation will have her exploring issues of ambition, as well as of charity, forgiveness, and humility, as she moves nearer and nearer to some of the most hidden precincts of the human heart.

Charming Quirks of Others