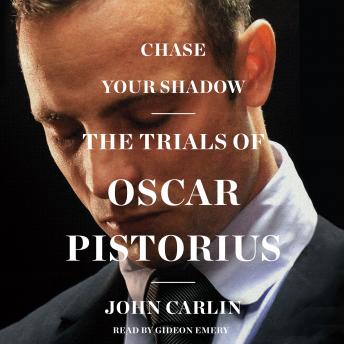 Chase Your Shadow: The Trials of Oscar Pistorius

Oscar Pistorius was eleven months old when he had both legs amputated below the knee, due to congenital fibular disease. Despite this severe disability, Pistorious grew up to be an extraordinary athlete, inspirational role model, and global symbol of resilience. In 2012 he became the first amputee runner in history to compete in the Olympics and was hailed as a hero not only in his native South Africa but around the world.

Everything changed for Pistorius in the early morning hours of February 14, 2013—Valentine's Day—when he shot and killed his girlfriend, model Reeva Steenkamp, through a closed bathroom door, allegedly because he mistook her for an intruder intent on doing him harm. He was arrested and charged with premeditated murder, and overnight, the public's view of Pistorius turned on its head.

Not since the O. J. Simpson case has a courtroom drama riveted global attention on one man's fate. Acclaimed journalist John Carlin's vivid firsthand account of Pistorius's seven-month murder trial, broadcast worldwide from Johannesburg, details the wrenching emotional breakdowns and merciless interrogation of the accused on and off the stand, the fraught relationship between the Pistorius and Steenkamp families, and the highly controversial verdict of culpable homicide, for which Pistorius received a five-year sentence.

But Chase Your Shadow is far more than just a sensational crime story, as Carlin shows through meticulous reporting and extensive access to Pistorius and his family and friends. This courtroom confrontation between a white, privileged, twenty-seven-year-old male athlete on trial for murder and the black female judge who alone would decide his fate—held in a democratic country trying to exorcise its history of racial hatred and endemic violence against women—exposes the complex social and political realities of post-Apartheid South Africa.

Chase Your Shadow: The Trials of Oscar Pistorius