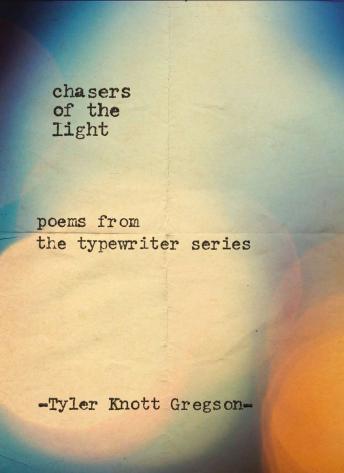 Chasers of the Light: Poems from the Typewriter Series

The epic made simple. The miracle in the mundane.

One day, while browsing an antique store in Helena, Montana, photographer Tyler Knott Gregson stumbled upon a vintage Remington typewriter for sale. Standing up and using a page from a broken book he was buying for $2, he typed a poem without thinking, without planning, and without the ability to revise anything.

He fell in love.

Three years and almost one thousand poems later, Tyler is now known as the creator of the Typewriter Series: a striking collection of poems typed onto found scraps of paper or created via blackout method. Chasers of the Light features some of his most insightful and beautifully worded pieces of work—poems that illuminate grand gestures and small glimpses, poems that celebrate the beauty of a life spent chasing the light.

Chasers of the Light: Poems from the Typewriter Series