Chasing Goldman Sachs: How the Masters of the Universe Melted Wall Street Down...and Why They'll Take Us to the Brink Again 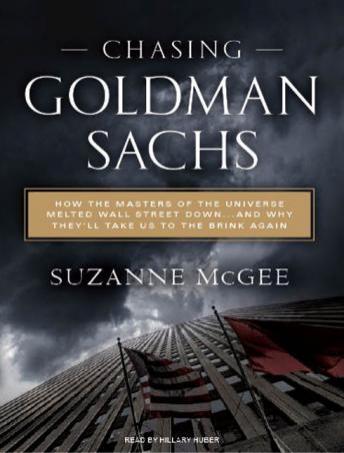 How did Wall Street become a self-serving and ultimately destructive profit machine that imploded? Wall Street's real job is to be our 'financial utility'-good financial plumbers that funnel capital to companies so the economy can expand and create jobs and also provide the means for individual investors to build portfolios that will increase personal wealth.

But Wall Street went haywire and became (in Jon Stewart's words) a 'bizarro' place that lost touch with most of America. Suzanne McGee provides a penetrating and disturbing look at forces that have transformed Wall Street into a risk-taking behemoth that spun out of control and took the economy and millions of 401(k)s down with it. Primary among these forces was 'Goldman Sachs envy.' The demons that drove Richard Fuld of Lehman Brothers, Stanley O'Neil of Merrill Lynch, and the rest of Wall Street to ever-greater risk were perverse incentives and the illusion that they could make even more money than Goldman Sachs (where $11.6 billion in profits in 2007 led to an average bonus of $660,000).

Firsthand reporting from veteran Wall Street journalist McGee provides riveting storytelling and a narrative that will grab both Wall Street insiders and people on 'Main Street.' She is the perfect guide through the labyrinth that is Wall Street, which now reaches from the actual street to Greenwich-based hedge funds, investment banks, venture capitalists in Silicon Valley, the futures pits of Chicago, and sovereign wealth funds.

Chasing Goldman Sachs: How the Masters of the Universe Melted Wall Street Down...and Why They'll Take Us to the Brink Again