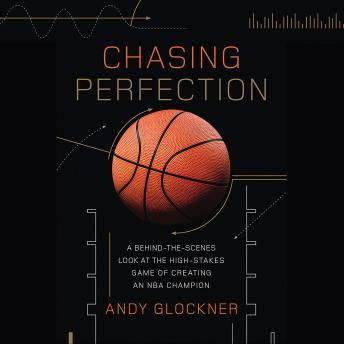 Chasing Perfection: A Behind-the-Scenes Look at the High-Stakes Game of Creating an NBA Champion

Basketball team building is the ultimate challenge at the NBA level and the last few years have seen a massive change in the amount of money, technology, and approaches to finding and evaluating players. This process starts at the high school level, goes through college, and culminates in the NBA, where the ability to identify and cultivate talent is at an absolute premium. Media and fans like to talk about 'busts' when a player doesn't work out, but in truth, it takes a complete team/franchise culture beyond any evaluation system to ensure the greatest chance of player success.
Spanning the entire amateur and pro basketball landscape and using the 2014-2015 NBA season as a prism to a much larger story, Chasing Perfection is a fascinating, all-access spin through the inner workings of the smartest minds at every level of the game. It is about the ongoing, relentless, high-stakes quest to find what national sports writer Andy Glockner calls 'Perfected Players' and what ultimately happens to them at the highest (pro) level. Every team knows they want to find the next Jordan or LeBron. Rather, the resources teams are pouring into various kinds of research and analysis is intended to turn less expensive, supporting players into crucial extra wins and, hopefully, championships. Chasing Perfection explores those players who, by the end of their run through high school and college and into the NBA, hit as many qualitative and quantitative predictors of future success as possible. Molded and then unearthed by years-long processes, they theoretically should be very strong contributors, but there are a ton of external factors that can affect individual success. Sometimes, though, they bomb, and the stories of why they do are as interesting and illustrative as those who actually succeed. Maybe more so.
Chasing Perfection will generate a lot of conversation, as fans of both basketball and Moneyball-style performance analytics, people in the industry, and fans/outsiders will then discuss further and expand their understanding and approaches. It answers questions such as: How do the San Antonio Spurs continue to get enormous production above normal from their complementary rotation players? What is behind the quite rise of the Atlanta Hawks? What is philosophy behind the so-called 'tanking' employed by the Philadelphia 76ers? Where do Perfected players come from? How are NBA teams using Big Data? Who are the top 10 current Perfected Players and the most Perfected Player?

Chasing Perfection: A Behind-the-Scenes Look at the High-Stakes Game of Creating an NBA Champion