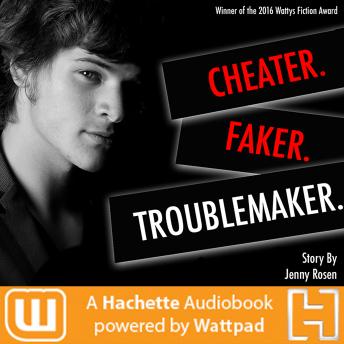 CHEATER. FAKER. TROUBLEMAKER. is a new release from Hachette Audiobooks: Powered by Wattpad - an innovative collaboration between Hachette Book Group, a leading publisher, and Wattpad, a passionate storytelling community of over 45 million people. Your favorite online stories, now available in your headphones!

When it comes to losing her virginity, seventeen-year-old Alex has every intention of waiting for 'the one.' Problem is, she's attracted to trouble. After a traumatic breakup leaves her emotionally scarred and therapy pushes her past her breaking point, Alex departs from her New Jersey hometown to stay with her cousin, Caleigh, in L.A. hoping to distance herself from boy trouble for the summer.

Enter, Elias King, seventeen-year-old whirlwind with a reputation for tearing through girls and leaving a string of broken hearts behind. Still reeling from a tragic accident that resulted in the death of his girlfriend, Elias relies on drugs, alcohol, and sex to drown his pain.

When Elias's addictions nearly leave him homeless, his brother offers him a place to stay at his girlfriend Caleigh's house, complete with a new roommate tailor-made to clean up his act. Once Alex and Elias find themselves sharing a space in Caleigh's tiny guest room, their night-and-day personality differences set them on the warpath.

Though the two try to deny their intense sexual attraction, a simple bet changes the game. Alex wagers she can keep him sober and one-night-stand free for the rest of the summer, while Elias bets he can steal her heart and seduce her in less than thirty days.

But if Elias loses, he has to spill the dark secret surrounding the death of his ex. If Alex fails, she has to reveal her virgin status to Elias. But she can't just tell him, she'll have to show him.

CHEATER. FAKER. TROUBLEMAKER is a dual POV young adult contemporary novel complete at 80,000 words and is the first book in a series.