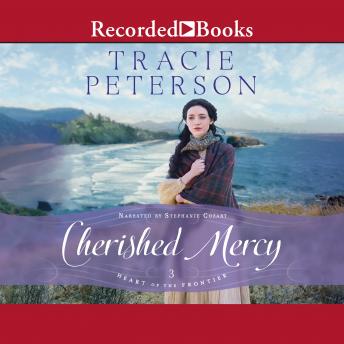 After surviving the Whitman Massacre as a child, Mercy still prays for peace between the native peoples and the white settlers of Oregon Territory. Longing for purpose, she travels to another mission to help a friend. There she meets Adam, a handsome young minister. When tragedy strikes yet again, Mercy and Adam must rely on their faith to make it out alive. The Inspiring Conclusion to Tracie Peterson's Heart of the Frontier Series Mercy Flanagan survived the Whitman Massacre as a child, and now her heart's cry is for peace between the native peoples and the white settlers inhabiting Oregon Territory. Unfortunately, most of the settlers would rather the tribes were removed from the land completely, one way or the other, and tensions are rising. Mercy has grown tired of Oregon City and feels that she has a larger purpose in life, so when she learns that family friend Eletta Browning is pregnant, she travels south to the Rogue River Valley to help. At the Rogue River Mission, Mercy meets Eletta's brother-in-law, Adam, who has suffered a broken engagement. Mercy finds him attractive, but Adam seems determined to focus on ministering to the local tribes and keeps Mercy at arm's length. When tragedy strikes and tensions in the territory reach the boiling point, Mercy is pushed to the limit of her strength. She and Adam must rely on their firm faith in God in order to make it out alive.