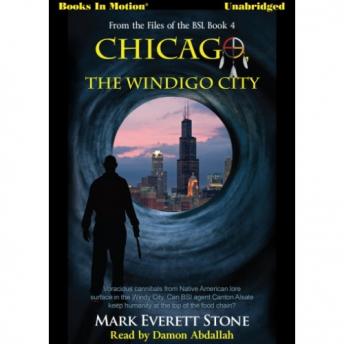 Kal Hakala is the Bureau of Supernatural Investigation’s best agent, but even he needs a break after his last case, which brought him a hair’s breadth from death and killed the fiancée of his best friend, a Mescalero Apache agent named Canton Asate. Kal’s temporary desk-job is nothing less than leadership of the entire BSI. Now it is on his head to assemble teams of agents to fight the latest Supernatural incursions and man up if they fail. Windigo spirits in Chicago are possessing human beings and transforming them into ravenous cannibals. Canton is the natural choice for a team leader because of his knowledge of Native American lore. Is Canton, a legend with a knife, ready to strike again, so soon after his fiancée’s death? What about Kal’s own girlfriend, Jeanie? Can he stand to put her in danger and beyond his protection? Kal is forced to use the BSI’s cutting-edge virtual reality system to see what makes them both tick. Will the experience of virtually living their lives afford him the will to send those he loves into danger? Can an emotionally damaged man who has never led a team and a woman who traveled through time from the 1940s make the cut? For Kal, the choice isn’t easy, but for Canton and Jeanie, it could be deadly.