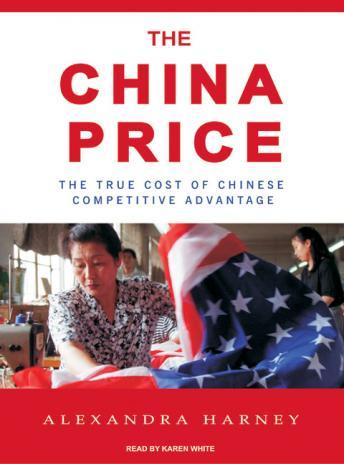 The China Price: The True Cost of Chinese Competitive Advantage

To write The China Price, Alexandra Harney has penetrated further and deeper into China's enormous ecosystem of export-oriented industry than any outsider before her to uncover the truth about how China is able to offer such amazingly low prices to the rest of the world. What she has discovered is a brutal, Hobbesian world in which intense pricing pressure from Western companies combines with ubiquitous corruption and a lack of transparency to exact an unseen and unconscionable toll in human misery and environmental damage. The recent scandals about Chinese-made toys, tires, and toothpaste drive home a central tenet of this book: What happens in Chinese factories affects all of us, everywhere.

In a country with almost no transparency, where graft is institutionalized and workers have little recourse to the rule of law, incentives to lie about business practices vastly outweigh incentives to tell the truth. Harney reveals that despite a decade of monitoring factories, outsiders all too often have no idea of the conditions under which goods from China are made. She exposes the widespread practice of using a dummy or model factory as a company's false window out to the world, concealing a vast number of illegal factories operating completely off the books. Some Western companies are better than others about sniffing out such deception, but too many are perfectly happy to embrace plausible deniability as long as the prices remain so low. And in the Gold Rush atmosphere that has infected the country, in which everyone is clamoring to get rich and corruption is rampant, it's almost impossible for the Chinese government's own underfunded regulatory mechanisms to do much good at all.

Perhaps the most important revelation in The China Price is how fast change is coming, one way or another. A generation of Chinese flocked from the rural interior of the country to its coastline, where the factory jobs are in the largest mass migration in human history; but that migration has slowed dramatically, in no small part because of widespread disenchantment with the way of life the factories offer. As pollution in China's industrial cities worsens and their infrastructure buckles, and as grassroots activism for more legal recourse grows, pressures are mounting on the system that will not dissipate without profound change. Managing the violence of that change is the greatest challenge China faces in the near future, and managing its impact on the world economy is the challenge that faces us all.