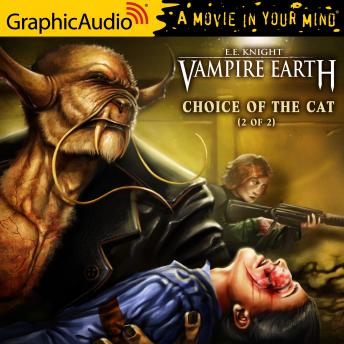 Choice of the Cat (2 of 2) [Dramatized Adaptation]

David Valentine resigns as a Wolf militia, and accepts an offer to become a Cat, one of the stealthy warriors trained to spy on, and go toe-to-toe with the Reapers. Under the command of his mentor, Smoke, Val's first mission is to enter the Kurian zone and investigate 'The Twisted Cross', a strike force of alien-human hybrids, possessing the skills of combat veterans and the hunger of the Reapers...Along the way he befriends a powerful alien, a Grog named Anh-Ka, who declares David his blood brother after Valentine nurses him back from death. Performed by Ken Jackson, Tim Getman, Lily Beacon, Jeff Baker, Karen Carbone, Eric Messner, David Coyne, Katrina Van Duyn, Colleen Delany, James Konicek, Danny Gavigan, Johann Dettweiler, Elizabeth Jernigan, James Lewis, Tim Carlin, Daniel Stevens, Michael Glenn, Tony Nam, Terence Aselford, Mort Shelby.

Choice of the Cat (2 of 2) [Dramatized Adaptation]