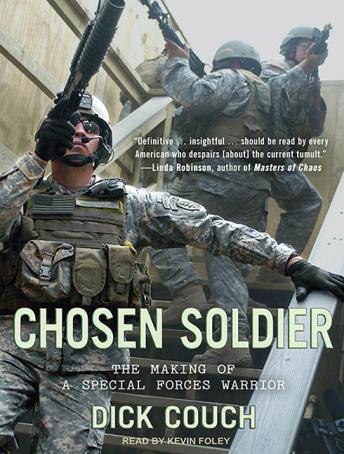 Chosen Soldier: The Making of a Special Forces Warrior

In combating terror, America can no longer depend on its conventional military superiority and the use of sophisticated technology. More than ever, we need men like those of the Army Special Forces-the legendary Green Berets.

In Chosen Soldier, Dick Couch draws on nearly a year spent at Special Forces training facilities and offers an unprecedented view of the education of these men.

Following the experiences of one class of soldiers as they endure this physically and mentally exhausting ordeal, Couch spells out in fascinating detail the demanding selection process and grueling field exercises, the high-level technical training and intensive language courses, and the simulated battle problems that test everything from how well SF candidates gather operational intelligence to their skills at negotiating with volatile, often hostile, local leaders. Chosen Soldier paints a vivid portrait of an elite group, and a process that forges America's smartest, most versatile, and most valuable fighting force.

Chosen Soldier: The Making of a Special Forces Warrior