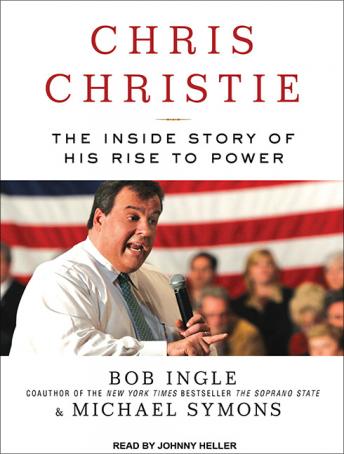 Chris Christie: The Inside Story of His Rise to Power

New Jersey Governor Chris Christie has become a national Republican Party figure, famous for his blunt public statements, his willingness to confront powerful special interests, and his determination to change the ingrown, corrupt, backroom political culture of New Jersey. In just two years as governor, Christie has moved aggressively to reduce the state's ballooning deficit, rein in lucrative entitlements for teacher, police, fire, and public employee unions, cut out-of-control government spending, and create jobs by reducing counterproductive business regulations. But beneath Christie's combative public persona is an intensely loyal family man, whose deep roots in New Jersey shape his core values. Written by New York Times bestselling author Bob Ingle and fellow journalist Michael Symons, who have covered the governor's political career for more than a decade, Chris Christie offers the first inside portrait of this fascinating man.Drawing on interviews with Christie himself, his wife, Mary Pat, his brother, Todd, his father, Bill, his uncle Joe, and many longtime supporters as well as political opponents, Ingle and Symons trace Christie's life. He grew up in New Jersey, surrounded by a big, roiling Italian-American family where his mother, Sondra, and grandmother Anne were powerful influences. Surprisingly, his political career nearly ended after a bruising loss in a local county campaign, but was revived when Christie was appointed United States Attorney for New Jersey. He soon became a feared prosecutor, and culminated an impressive string of successful cases with a multi-year investigation that resulted in the arrests of more than forty people, in one of the state's most notorious examples of political corruption.Despite calls to run for president, Christie reiterated his commitment to reforming New Jersey. Chris Christie: The Inside Story of His Rise to Power goes behind the scenes to reveal his family life, his public life, and what the future might hold.

Chris Christie: The Inside Story of His Rise to Power