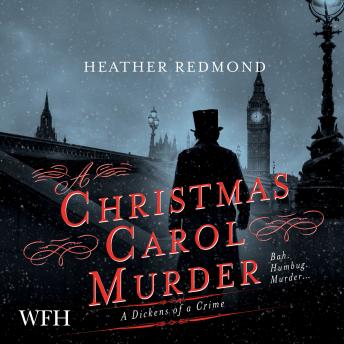 Charles Dickens is one of the most famous and influential writers in English literature and Heather Redmond's delightful series asks what if Dickens had also solved crimes...? Now, the third book in the acclaimed A Dickens of a Crime series reimagines Dickens' most famous story, A Christmas Carol, as a murder mystery with Dickens himself as the sleuth.

London, December 1835: Charles and Kate are out with friends and family for a chilly night of caroling and good cheer. But their blood truly runs cold when their singing is interrupted by a body plummeting from an upper window of a house. They soon learn the dead man at their feet, his neck strangely wrapped in chains, is Jacob Harley, the business partner of the resident of the house, an unpleasant codger who owns a counting house, one Emmanuel Screws.

Ever the journalist, Charles dedicates himself to discovering who's behind the diabolical defenestration. But before he can investigate further, Harley's corpse is stolen. Following that, Charles is visited in his quarters by what appears to be Harley's ghost--or is it merely Charles' overwrought imagination? He continues to suspect Emmanuel, the same penurious penny pincher who denied his father a loan years ago, but Kate insists the old man is too weak to heave a body out a window. Their mutual affection and admiration can accommodate a difference of opinion, but matters are complicated by the unexpected arrival of an infant orphan. Charles must find the child a home while solving a murder, to ensure that the next one in chains is the guilty party...